You’ve got everything serviced and have packed enough of everything to last for however long it needs to last before you go shopping. You’ve got the camp site, or motel or cottage or whatever booked and confirmed and paid for. The scene is set for a great holiday. Wrong.

The spanner in the works

Well, the planning and packing and stuff is all done and dusted. You’ve pulled out of the driveway and the trip has started. From this point on you can bet that there will be something that doesn’t go to plan. Ninety nine percent of the time this won’t matter a bit. It’ll probably be something that’s not absolutely necessary being forgotten and can be picked up at the first fuel stop – our favourite thing to forget is insect repellent. The rest of your trip may well continue on with no stray spanners finding their way into the works. But then again….

A few years ago Jenny and I decided that we’d do a grand trip from Moe to Marla to Oodnadatta to Marree to Birdsville and back home via central NSW. We got to Oodnadatta just fine and we were having a great time. Our first night in Oodnadatta we went to the Transcontinental Hotel for a couple of quick drinks before we made dinner. Lots of drinks and about seven hours later we staggered back to the caravan park, had a sandwich and went to bed. Sometime during the night we were woken up by rain and we just rolled over and went back to sleep. Next morning we were confronted by this. 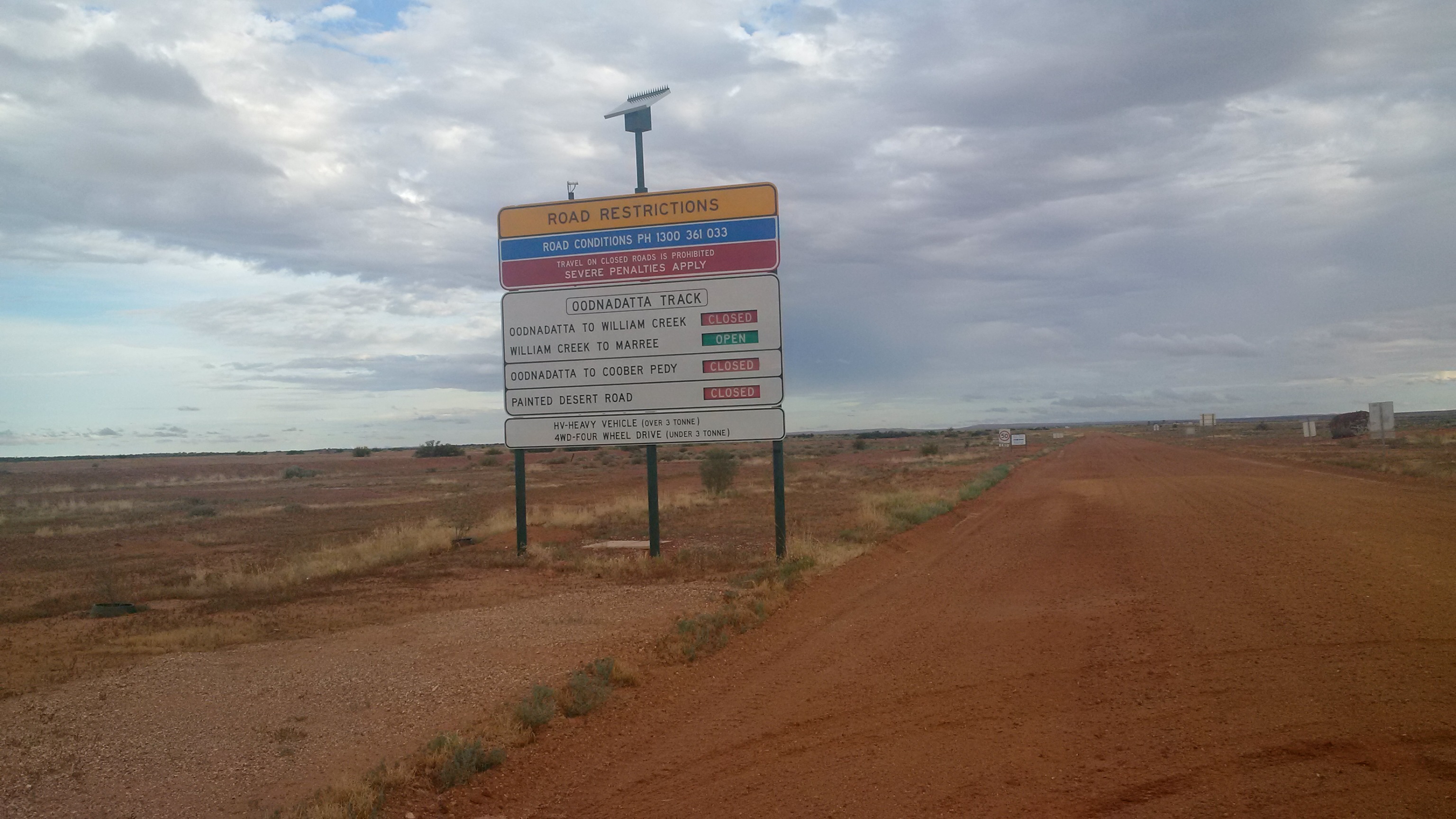 That put a bit of a spanner in our works. We were stuck in Oodnadatta until a road opened.

Just before lunch the next day we were told that in about an hour the road will be opened for anyone who wants to leave and then it’ll be closed again. We packed up quickly and waited for the road to open. At this stage we didn’t know which road though. It transpired that it was the road to Marla so off we went.

It was a pretty muddy trip but we managed to avoid getting bogged.

Once back in Marla the question was what now ? Out came the map and we decided that we’d head on down towards the Flinders Ranges and have a bit of a poke around there and then head off to Broken Hill and from there meander homewards.

Our second big spanner in the works was this.

There we were about thirty kilometres from Hawker with no mobile phone coverage and a busted camper. So what to do ? We unhitched and drove to Hawker and organised recovery of the camper whilst hoping it was still there. I had the inevitable screaming match with the insurance company that got me nowhere of course. While the camper was being recovered we organised a motel room for the night. When the camper arrived we found out that the damage wasn’t extensive and it only needed and new brake drum and six wheel studs. We retired to the pub for a very nice meal and the next morning we continued on our way.

Plan B or flexibility ?

As you can tell from both of our episodes we had no plan B.

What we did have though was flexibility. This is an attitude thing and not a planning thing. When things go pear shaped as outback travellers we need to be able to just deal with it and make the best of the situation. In both of our cases in spite of the spanners we had a great time.

So. Plan B or flexibility ? I’d go for flexibility every time. Remember that your plan B is still subject to spanners in the works. Flexibility isn’t because you’re, well, flexible. It is what it is is a saying that annoys me but in outback or remote travel it’s worth keeping in mind. With flexibility you can just go along with your circumstances. The important thing is to not panic or get stressed – just go with it.

It’s worth noting that the roads out of Oodnadatta didn’t reopen for over a month after we left. If we didn’t take the chance when it was presented we’d have been there a long time.

Now, I’m a planner. If you know about the MBTI you’ll understand when I say I report ESTJ. But once the planning is done and you’re on your way remember anything can happen and it’s up to you to make the best of it and have fun regardless. Flexibility is the key.