Our second night at the Drovers Run Caravan Park in Marree was a pleasant affair. We partook of Jo and Brent’s most delicious damper with real butter and golden syrup along with a couple of glasses of wine. We cooked a small dinner, had another glass of plonk and retired for the night.

We awoke to an amazing sight. NO FLAT TYRES. We got packed up and on our way before any of the tyres could change their minds.

The trip towards Hawker is a long boring affair and with about 30km’s to go my wife said “well dear only about 30k’s to go”. At the point there was a thump.

Marla was where our tyre hell started.

The Oodnadatta Track was pretty bad. Corrugated and rocky with a few bull dust holes thrown in for good measure. After a couple of kilometres from Marla we stopped and let the tyres down. Camper and car rear tyres down to 25psi and the car front down to 30psi. We took off again at between 30kph and 60kph. The first part of the track was OK at 50 to 60kph but the further we went the slower we went.

On this stretch we had a few punctures and became pretty good at plugging the holes.

We took that as a bit of a hint and dropped the car rear tyres down to 20psi. After three flats we arrived at Oodnadatta and had a well earned break. Dinner and a couple of drinks at the Transcontinental Hotel and we retired for the evening at the caravan park at the rear of the Pink Roadhouse.

We awoke to a flat tyre of course and figured that seeing as we had four plugged tyres we’d get the worst one patched. Of course the only person in Oodnadatta with the keys to the workshop had a day off and wasn’t in town. Oh well, such is life. so we took the offending wheel off and plugged the puncture and off we went towards William Creek.

From there the road deteriorated somewhat with quite severe corrugated and rocky sections.

By the time we got to William Creek we needed to have a tyre patched rather than just plugged. The person doing it had never come across double beaded rims before and had a devil of a time getting the tyre off and after patching it had an even worse time getting it back on. If only he had listened but he was a young know-all pilot and I was a know nothing mug tourist.

While we were waiting for the tyre to be patched I noticed that one side of the camper was a bit down. Had a look and one side of the suspension had dropped so I jacked it up and re-tightened the trailing arm mounts. While I was at it I took of the wheel and plugged the tyre.

Anyway, after putting the camper wheel back on, off we went towards Marree. Suffice to say that there were more punctures on the rocks and corrugations and we eventually arrived well after sunset. We were so late that we missed the damper, more about that in a while. We got set up, had a glass of wine, cooked and ate dinner and went to bed.

Next morning there were two punctures to greet us. One was easily patched but the other seemed to be leaking in a lot of places. Asked Brendan to take it off and have a look and it was pronounced very dead. We got a slightly incorrect width tyre to get us on our way – hopefully to Hawker, SA.

From Kings Canyon we went over to the Yulara Resort. It was a pretty pricey place too – souvenirs, etc. All added to the cost of a couple of nights in the caravan park.

Washing was done while we lazed around and did nothing much. We went to one of the eateries for dinner and a couple of drinks and very pleasant it was too.

During the night the wind picked up and the weather started on the squally rain stuff which saw us getting up during the night to remove the tropical roof from the camper. The flapping and carrying on had bent one of the camper support hoops. Fun times were had by lots of campers, including us, pulling awnings down, securing tables and chairs, etc.

Next day dawned OK – not brilliant but just OK. The wind had died down and although still overcast the rain seemed to have gone.

We packed up and headed off for the mandatory photos of Uluru. By the time we got there the sky had cleared but there was still an icy wind blowing.

Then we were off. Next stop was a distant view of Kata Tjuta.

A bit more of a drive and we had a great view of Mt. Conner.

From there we carried on to our stop for the night. Erldunda. Good thing we only stopped there for one night. The caravan park seemed pleasant enough apart from one thing. The sewerage pit was overflowing and forming a stinking lake. The showers and toilets were backed up and couldn’t be used. Some of the locals told us that it happened all the time. Next morning we asked for our money back or at least a partial refund but no luck. What a pit.

Next stop Marla. The caravan park there is pretty good but don’t park on the grass for fear of crucifixion. Marla was pretty much where Tyre Hell started. We think that there was a bit of unseen damage done to the rear tyres of the car on the road to Kings Canyon and when we hit the Oodnadatta Track things went a bit down hill.

When we left Hamilton Downs Youth Camp we decided that we’d get home via Hermannsburg, Kings Canyon, Uluru, Marla, Oodnadatta, Marree, Flinders Ranges and on towards home via all bitumen roads.

After doing a heap of shopping in Alice Springs we set sail for Hermannsburg.   The road was bitumen and good. We had a bit of a poke around and got a couple of bits and pieces including a nice little print of an Albert Namatjira  painting.

From Hermannsburg the road went downhill fast. Unsealed with lots of rocks and parts of it were severely corrugated. There were also some pretty boggy sandy areas to get through. We eventually made it to Kings Canyon where we had a bit of walk around – nothing as ambitious as the canyon rim walk though.

After our day at Kings Canyon we awoke to a beautiful clear warm day and a flat tyre. Little did we know that this was the start of things to come.

After stumbling across this thread on myswag.org which has a reference to this I decided to have a look at my camper. 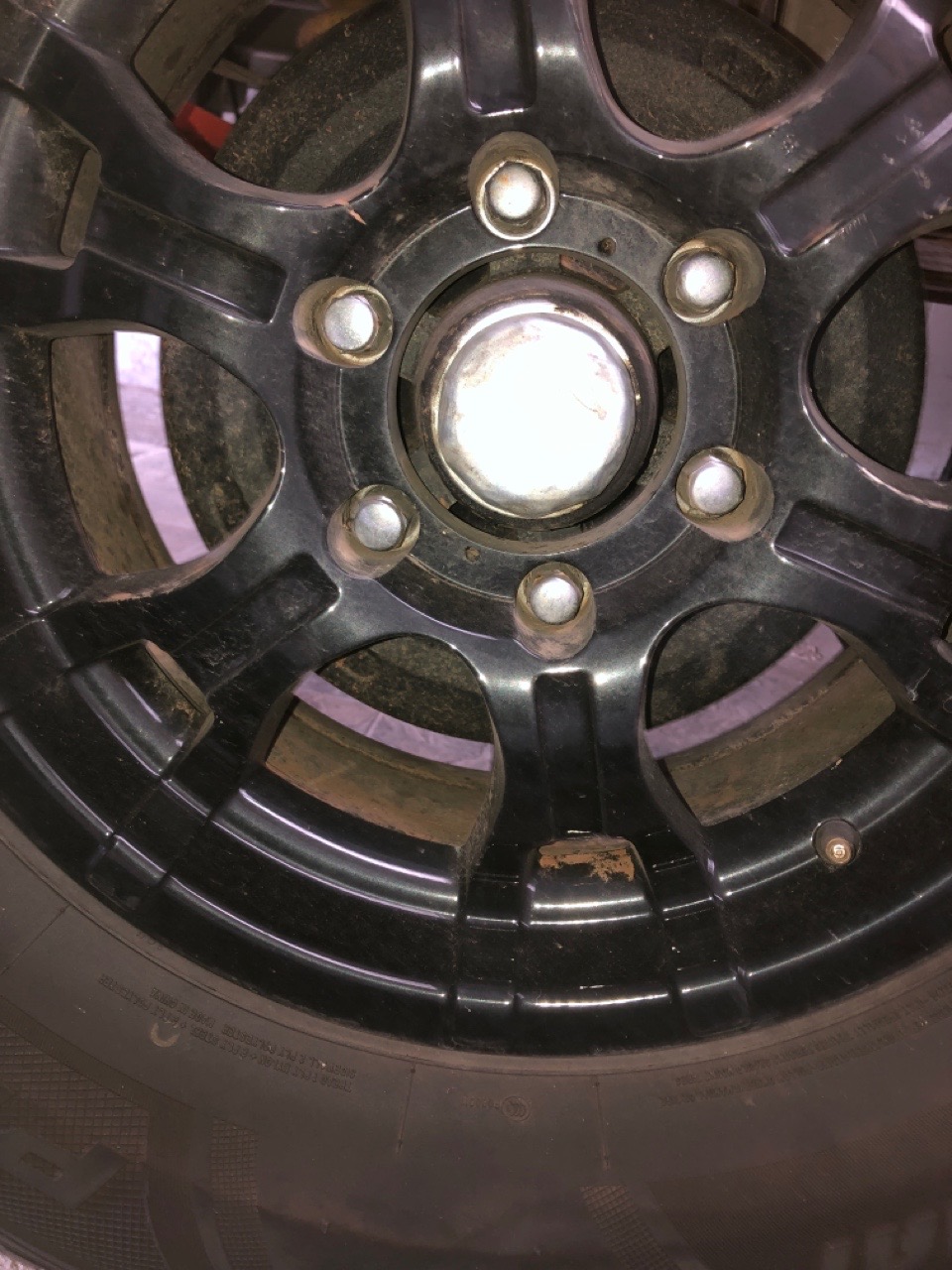 It would seem that the wheel is ONLY supported by the studs and makes it easy to see why the failure occurred. On the Land Rover the centre of the wheel is an annoyingly (when your changing wheels) tight fit over the hub. This means that the studs are only transmitting the force required to turn the wheel and not the forces generated by bouncing around on rough roads. The camper on the other hand has only the studs to support the forces generated by the crashing and banging over the corrugations and stones of the outback. After reading the referenced thread I reckon this is a failure of thinking in the design stages of the camper.

I’ve read and heard of this happening to other campers/caravans and some cars / utes / four wheel drives so perhaps this could be the root cause ?

As you can see the wheel studs have sheared off allowing the wheel to bounce off down the road. It was a combination of things that contributed to it. A VERY small bearing surface where wheel meets hub. A few hundred kilometres of REALLY bad roads. And possibly a bit of over tightening of the wheel nuts. Apparently it’s also more likely to happen with alloy wheels to. So keep everything clean, do not over tighten your wheel nuts and take it easy on really bad roads.